Paper Clip and Soda Straw Save My Pedalboard 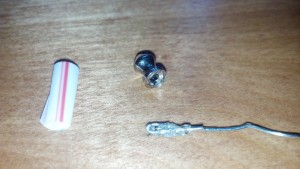 I had one of those awful moments earlier today. I had left my microphone plugged into my pedalboard last night (never a good idea), and since I use an XLR-to-quarter-inch impedance transformer, that means about four inches of solid connector sticking straight up from the pedalboard input. Which of course, I tripped over, destroying the transformer, breaking off its 1/4″ plug, and leaving the very tip of the plug jammed all the way down into the jack socket. And I have a rehearsal tonight. No time to take the pedalboard apart and replace the jack, even if I had a spare jack which I don’t, and in any case all my electronics and soldering stuff is up in Ithaca.

So I searched around and found this article, which addresses the much more common problem of breaking a plug off in a 1/8″ stereo jack like that on a laptop or an iPod. The best suggestion there involves using a pen refill or the straw from a juice box, but that won’t work with the larger 1/4″ jack.

Plus, the larger jack has larger springs. When you plug into a jack, there are spring-loaded metal tabs that press against the plug and hold it in place. There are several of them including one that fits into the groove in the tip. So you can’t just reach in and pull the tip out — it’s too hard to get a grip and you can’t overcome the force of the spring without a very firm grip.

So I followed the other, riskier suggestion. I got a soda straw and cut off about an inch, then slit it up the side. I rolled it tight, inserted it into the jack, let it open up, and pushed it down firmly until it was right up against the broken-off tip. (See photo.) Then I straightened a paper clip and squeezed the end into a loop that would fit into the hole in the plug tip.

I mixed up some epoxy, got a good glob of it onto the paper clip, and inserted it into the jack and pressed it into the hole in the tip. The soda straw ensured that no epoxy got into the jack itself. I held the clip there for thirty seconds or so, then left it to harden for three hours.

Now here’s the extra step that you probably wouldn’t need to do for a 1/8″ jack. The top-most spring tab in the jack was no longer being held back by the body of the plug, so if I had tried to pull the broken tip out, it would have hit that tab and probably fallen right back in, leaving me back where I’d started. You have to hold that tab out of the way as you pull out the broken tip.

So, with a pair of pliers in my right hand, and an awl (looks like an ice pick, with a screwdriver-style handle) in my left hand, I got to work. I used the awl to hold the spring back, grasped the paper clip with the pliers, and pulled. The plug came free, and between the awl and the soda straw, came out smoothly. The epoxy let go at the very end, so I had to fish the broken tip out of the jack with the awl, but the aforementioned spring tab prevented it from falling back in very far.

Pedalboard is fine, and fortunately, I do have extra microphone adapters.

This entry was posted in Gear, Music and tagged diy. Bookmark the permalink.