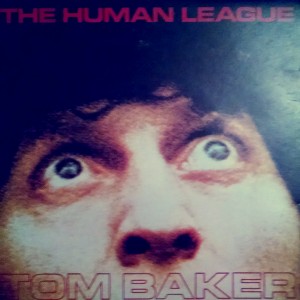 Tom Baker was my first doctor, and even Peter Capaldi can never replace him in my heart. Near the peak of my obsession with the show, shortly before Baker’s departure, the Human League released “Tom Baker,” an instrumental b-side with a photo of him on the sleeve. But somehow until I saw the 45 on eBay recently, I’d never known the song existed.

The eighties tend to blend into one long synth-pop bad-hair decade, but in fact, synth-pop was almost unknown in 1981, especially in the U.S. At the time, I was deeply into Bowie, Eno and Talking Heads, and therefore aware of Kraftwerk and Cluster and Neu!, but there wasn’t much electro-pop just yet. There were some interesting things on indie radio (Joy Division’s “Love Will Tear Us Apart” followed by the great early New Order singles, Laurie Anderson’s fascinating “O Superman” video, the newly reformed King Crimson) but most of the synth-pop records that made their way across the pond was dull and/or derivative. Gary Numan’s “Cars” sounded like an outtake from Bowie’s Low, “Turning Japanese” was not only dumb but kind of offensive, “Just Can’t Get Enough” was bubblegum pop. The only interesting single I remember from those early days was OMD’s “Enola Gay.”

I never paid much attention to the Human League. They had a couple of great singles but otherwise sounded like every other generic synth-pop band of the era. However, I’d never heard of them in 1981 and neither had pretty much anyone else. The Human League that hit the charts a year later with “Don’t You Want Me Baby” was a completely different band from the one that released “Tom Baker.” Shortly after that single came out, the original band, which was edgy and experimental, broke up due to a stunning lack of commercial success. Martyn Ware and Ian Marsh left to form Heaven 17, and Phil Oakley hired a couple of high school girls (literally) and kept the Human League name. Both bands were considerably poppier than the original.

According to this somewhat uninformed article (Dr Who, and the entire BBC Radiophonic Workshop, was “not afraid to go electric” going back to before there was a such thing as a synthesizer), the original band were huge fans of the show and often covered the theme song live in concert. They jumped at an opportunity to visit the Workshop and wrote the “Tom Baker” song shortly therafter, probably trying to channel their theme-song cover without getting sued. Today, it sounds more dated than Delia Derbyshire’s 1963 original, but it’s still a great analog-synth-fest. You can find it nowadays on the rerelease of Travelogue, their first album to be released in the US. It also features a few other gems like the deeply weird “Only After Dark” and their medley of Gary Glitter’s “Rock & Roll” and David Bowie/Iggy Pop’s “Nightclubbing” (the latter also covered, devastatingly, by Grace Jones).

This entry was posted in Music. Bookmark the permalink.