“Just when you think you’ve scraped the bottom…”

“…you find that you’re just scraping the surface.”

For a few years in the early 1990s, during my exile in New Jersey, I worked a genuine 9-5 job. WNYC was my lifeline, and Chopin’s Marzurka in C Major (Op. 24 No. 2) was my signal that I absolutely had to get out of bed and into the shower in order to get to work on time. 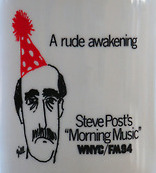 The mazurka was the theme song to Steve Post’s Morning Music, which held down the 8am slot on WNYC-FM for years, until it was canceled by new management after ex-Inferior† Giuliani privatized the formerly NYC-owned station. (The new station president, Laura Walker, allegedly told Post, “I don’t like your sense of humor. I don’t get it. I don’t get your show.”)

I “got” Steve Post, and loved him dearly. I “don’t get” WNYC’s current alternative to Morning Edition, The Takewaway, and I would have loved to hear Steve Post mock its jejune mockery. I miss him, and his attitude, and the station that once saw him as a New York City treasure, and now can only muster up a four-paragraph obituary for him. (But follow the link to listen to Sarah Fishko’s memories.)

This entry was posted in Music and tagged nyc, obituary, radio. Bookmark the permalink.