When a Woman Appropriates Cock-Rock

Face hidden by long hair, blasting overdriven bolts of atonal noise through sheets of white-hot feedback that obscure the instruments and the unintelligible vocals. Is this rock&roll? 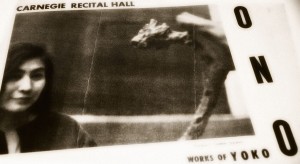 If the face is a white man, and the atonal noise is blasting out of an electric guitar, hell yes. Fists pump and the crowd screams “rock on dude!” But what if the face belongs to an Asian woman who was performing internationally before any of these men were born? Then the rocking-on dudes are screaming something very different. Suddenly the noise is not rock&roll dude. Suddenly the rocknrolldudes are so tremendously offended by this noise that they cannot seem to summon enough vicious racist misogynist venom for it, and the woman making it. It’s music when it comes from a thrusting pelvis. Not when it comes from a woman’s mouth. Especially not an Asian one. Who isn’t even pretty. No centerfold she, you ignorant yobs.

Yes, I’m talking about you, beatlefans. The ones who think John Lennon was a genius except for when he married someone smarter than him. The ones who wanted nothing more than to be part of the coolestboysclubEVER until Their Hero said, no thanks. Done with the boys. No more club. He didn’t believe in Beatles but they did. He believed in Yoko. Yoko and him. And they never forgave him for it.

Whatthefucksishedoingthere? How dare this (Yes I’m A) witch get on stage with John Lennon and Eric Clapton? How dare a woman add her voice to our noise? When we unzip and wave our guitars around in front of an audience we want one thing from open-mouthed women and it is nofuckingwayNOT outdoing us and making our guitars go all limp. Jimmy Plagiarism can shatter our eardrums all night, copping ideas from all over Asia and we’ll burn our fat stupid fingers with our cigarette lighters but out of a woman’s mouth? Oh no no no. Get that freak off the stage. Why doesn’t she shutthefuckup?

She’s ugly. Oh no wait that’s a picture of John. He was so handsome.

The problem is, beatleflimflams, you have it backwards. The superstar avant-garde artist married a drunken pop star losing interest in the only thing he’d ever done as an adult. She went from putting on shows on three continents and collaborating with the best artists of her time, to helping overgrown pop boy move out of his fraternity house. She told him to his face what he couldn’t admit to himself. He was bored, he’d done all he could with these guys, it was time to move out and get his own apartment. She told him she’d love to be with him if he’d grow up and be himself instead of being one of the lads.

She didn’t give a shit about Beatles. ’What the fuck are The Beatles? I’m Yoko Ono! Treat me as me!’From the day I met her she demanded equal time, equal space, equal rights. I didn’t know what she was talking about. …

Yoko really woke me up to myself. She didn’t fall in love with the Beatle … she fell in love with me for myself, and through that brought out the best in me.

And that best meant leaving the club behind and throwing out the comic books and taking the pinup posters off the wall and sorry beatlewanks he had better things to do with his life sorry you didn’t. Poor pussywhipped rock star staying home baking bread and raising his son and finally not having to deal with all the sharks. Feed them to Mother. Let all the sleazy suits who ripped him off for so long have themselves ripped a new one by the dragon lady. What else could she be? How could a woman stand up to Allan B Kreep and the worms in the Apple and the bankers and the beatlefangerson?

What’s saddest of all is we’ll never know. We’ll never have John to balance out his more-talented but always safe partner. Poor Sir Paul, forever on the road to damask sofas. Trudging around playing I’ve Just Seen a Facelift note for note the way he wrote it in 1965 – the same year Yoko performed Sky Piece to Jesus Christ at Carnegie Recital Hall – performing it yet again when he hasn’t been 64 in as many years as The Beatles were The Beatles. Would John be hauling the old hits around behind him like Marley’s chains? Or would he have been onstage at BAM playing killer freakout guitar and beaming at Mother finally getting her due? Getting off on the downtown bands Sean was playing with? And maybe one day he’d have taken Lorne Michaels up on it and blasted through some old fifties rock&roll til Paul’s makeup finally cracked.

And maybe he would have been at MOMA, ignoring the sad little DO NOT TOUCH sign and climbing the ladder again.

I think that’s where he would be. Where he’d rather have been. Where I’d rather be. When I’m 64.

This entry was posted in Music. Bookmark the permalink.