My two newest FAWM songs are “Leaving Again” and “Flight Of the Rock Doves,” and each introduces an instrument I hadn’t used before in this FAWM cycle.

“Leaving Again,” in fact, introduces the newest member of our household, a century-old Steinway upright. We’d been visiting it and lusting after it for more than a year — it was on consigment at the wonderful McNeil Music in Ithaca — and now that they are moving downtown (yay) they needed to get things out of the store. Especially large, heavy things. So we seized the moment and now we have this gorgeous instrument. After it gets acclimated to its new home, it’ll need a tuning and some setup, but it’s in great shape.

The basis of this song is an improvisation played on the Steinway, a simple repeated figure in the key of A, varying slightly each time. (Yes, I’ve been listening to a lot of Philip Glass lately.) I recorded it simply by putting the recorder on top of the piano, with the top panel open. (I contributed the original piano recording, as well as two “alternate takes” of “Leaving Again,” to ImprovFriday this week.)

I played that original recording back through a series of effects — a Moog ring modulator, and a low-pass filter with the envelope set fairly high (so it only triggers when the sound is fairly loud, in this case, mainly on the notes at the end of the phrase). The filter’s cutoff was modulated by an outside LFO so it doesn’t respond the same way every time. That went into a reverb/pitch-shift patch on an Evenntide Eclipse. Together they give a subtle coloring to the piano, changing its tone and also providing what sounds like a backing synth part.

Over that playback, I recorded a harmonica improvisation, using a fairly clean chorus patch and another delay. I looped some of the harmonica phrases in my Boss RC50, and played others live. I’m very fond of the sound and feel of this piece and the way the electronics color it without changing the basic piano-and-harmonica combination.

Flight Of the Rock Doves

This was something of a tribute to the NYC pigeon, perhaps the most maligned bird in the world. (And not without reason.) But what do they think of us? They’re rock doves, doing what they do naturally — nesting in cliffs and raising their young and finding food where they can. Is it their fault they live in a city full of litterbugs and slobs?

I wrote these words sitting in the waiting room of an auto shop in Bensonhurst two weeks ago. I took a walk around the neighborhood with my recorder, and met a nice woman (not a crazy old lady) with seeds who scolded me for bothering the birds. We talked about pigeons and her father who was a songwriter. The words sat in my notebook for a week or so, and one afternoon on the subway, I sketched the chord progression out on the iPad

I finally sat down to record the song this morning, starting with the guitar part. I used the Washburn electric guitar that I won at the Grassroots festival this summer, and looped the verse and bridge parts separately into the RC50. I put some chorus and an extremely analog delay (a Soviet-era Russian rackmount monster) on it. 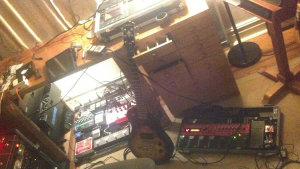 Recording setup for "Flight Of the Rock Doves." Kaoss Pad and EHX on the desk, pedalboard underneath, guitar leaning unsafely against the cabinet, RC50 beside it.

Then I assembled and edited the pigeon sounds on the laptop, and played them through a Kaoss Pad and my EHX 2880 (hands-down the best looper for long decaying loops).

And then I recorded the song live, singing the vocal and playing the harmonica part. I divided it up this way because I could not have achieved this harmonica sound acoustically in the rack. I’m using another analog delay and the legendary Small Clone, EHX’s sick little chorus pedal, into an Eventide TimeFactor with a filter patch. I’m opening and closing the filter using a pedal as I play — those effects were performed, not added later — and I also used another delay pedal, the Boss DD6, which has a nice metallic feel and a feature that lets you increase the feedback sharply for brief moments. You’ll hear that in the last harmonica chorus.

This entry was posted in Music and tagged fawm. Bookmark the permalink.