The Original Walk On the Wild Side 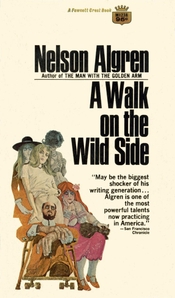 I don’t even remember where I bought the book. It was probably at a used bookstore; the title caught my eye immediately. I didn’t know someone had written a book based on the famous Lou Reed song. But it’s actually the other way around: Lou wrote the song based on the title of an unjustly forgotten novel by Nelson Algren, author of The Man with the Golden Arm

A Walk On the Wild Side was his last successful novel, in 1956. Lou Reed scorned this book in his classic monologue, and it has nothing to do with New York City, mostly being set in New Orleans. But the pimps and hustlers, the legless barroom fighter Schmidt on his wheeled platform, the homemade O Daddy condoms, the Navy commander wanting to be “made to behave” by the Black matron of a whorehouse – all of them would have fit perfectly into a Lou Reed song.

The book is famous for something else as well: the “three rules of life.” I didn’t realize it until the very end, when Dove (the main character) is getting advice in prison from Cross-Country Kline, “the only true criminal in the whole tank full of fools.” He’s an old-timer “with a battered and seamed old round brown ball of a face that looked as if it had been lined into the grandstand and lined right back,” and near the beginning of his monologue he outlines the rules:

There are more than three rules, though. Kline continues:

Never let nobody talk you into shaking another man’s jolt. And never you cop another man’s plea. I’ve tried them all and I know. They don’t work.

Life is hard by the yard, son. But you don’t have to do it by the yard. By the inch it’s a cinch. And money can’t buy everything. For example: poverty.

I had never heard the term “shaking another man’s jolt” before, but from the way it’s used in the rest of the book, it means interfering with how another prisoner is serving his time. The old man later dies in the same cell, shot while trying to escape a 99-year sentence.

It’s a magnificent novel, full of bitter observations about depression-era propaganda and politics. Algren reads like a somewhat more urban version of Sinclair Lewis, and I wonder if Lou ever went back and reread the novel when he was older. Algren’s bitter humor is certainly appropriate to modern New York City:

In the cheery old summer of ’31 New Orleans offered almost unlimited opportunities to ambitious young men of neat appearance willing to begin at the bottom and work their way up the Ladder of Success rung by rung. Those with better sense began at the top and worked their way down, that route being faster….

Self-reliance for the penniless in government aid to those already had more than they could use was the plan. But park benches were wet of a morning whether it rained or no; and it was possible to tire even of bananas.

Still at all, times weren’t as hard as some people grew fond of pretending. All that it happened really was a withdrawal from abnormal prosperity with business progressing on a downward grade toward new planes of normality and increasing equalization of opportunity. In short, we were going full steam ahead. Only this time one exciting opportunity was precisely as good as the next exciting opportunity. Which was to say, simply, that no one got paid any more.

Does that sound familiar? In that section Algren also makes a brief New York City reference as he lists the events of the year: “The President pressed a button in Washington that lit a fifty two million dollar building, the highest yet raised by the hand of man, at Thirty-Fourth Street and Fifth Avenue in New York.”

In one of the novel’s most gruesome scenes, Dove walks into a restaurant, shortly after arriving in New Orleans. In the back of the restaurant, a man is beheading turtles for soup.

Now the trouble with turtles is that they believe all things come to him that will but struggle. There’s always room at the top for one more, they think. And in this strange faith the snapping kind is of all the most devout. For it’s precisely that that makes them the snapping kind. Though the way be steep and bloody, that doesn’t matter so long as you reach the top of the bleeding heap.

The pile of turtle bodies grows as the butcher throws the heads on the floor, and the bodies keep fighting even after their heads are severed. Algren continues at length with his bloody noir predecessor to Yertle the Turtle.

Losing his head didn’t lose one his footing. His legs kept seeking yet bloodier heights. … Sensing that time was against him, he worked all the harder to succeed. Until the floor about the pyramid streamed black with blood, with some on their backs and some of their bellies.

Stepping on the stumps of a hundred bleeding necks, hauling itself over other backs, giving one a kick there and one a shove there, the body sent a dozen rising climbers sprawling over the cliff to failure. … Driven by some strength greater than that of others, waiting contentedly over mothers and orphans, it got its blind flippers at last onto the tail of a red snapper, hold itself onto the snapper’s back, pushed Red out from under, and landed smack in the middle of the heap.

He was the King of the Turtles.

The king waved his arrogant flippers triumphantly – “Always room for one more at the top” – just as something bumped him hard from behind and his short day was done. Sliding, sprawling, skidding, he slipped off the heap in a bloody skein and landed flat on his back below the table wigwagging frantically.

And as he lies there, Algren imagines the dying turtle’s pleas for help from his comrades.

“I never knowingly harmed a fellow creature unless he got in my way. I never took unfair advantage unless it profited me. … A devoted father, loyal citizen, a faithful employee, a kind employer, a considerate neighbor, regular churchgoer. Out of purity of heart I respected the laws of God and man. Purity, and fear of jail. Could you really stand by and watch associate the internal die?

Dove, of course, learns nothing.

He didn’t yet know there was also room for one more the bottom.

Algren wasn’t a middle-class moralizer; in a book of essays Doubleday refused to publish, he said, “You don’t write a novel out of sheer pity any more than you blow a safe out of a vague longing to be rich. A certain ruthlessness and a sense of alienation from society is as essential to creative writing as it is to armed robbery.”

He grew up in working-class Chicago and spent his entire life fighting injustice (as well as drinking heavily, suffering from depression and breakdowns, and gambling). Like most “radicals” he was involved with the Communist Party in the 1930s but grew turned off by its racism and its ideological rigidity. He wrote blistering books about Chicago corruption, and his last book (published posthumously) was about the Rubin Carter murder trial. His only lasting romantic relationship was with Simone de Beauvoir.

He was elected to the American Academy of Arts and Letters shortly before he died in 1981. The Chicago Tribune awards a Nelson Algren Award every year for short fiction, and the Nelson Algren Committee has an active Facebook page and holds a birthday party for him every year.

This entry was posted in Books, History, Politics. Bookmark the permalink.