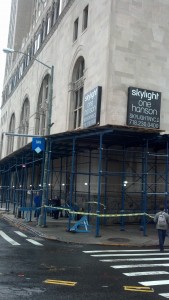 If the construction scaffolding around your very expensive apartment building had blown apart in medium winds a week ago, and you knew that a tremendous hurricane was on the way, wouldn’t you make sure the scaffolding was properly secured before the storm hit? Apparently not at One Hanson Place, where such pedestrian concerns seem to be far beneath the notice of the residents and management of this lofty building, Â surrounded this morning by debris and police tape after the scaffolding came apart again last night.

One Hanson Place is the former Williamsburgh Savings Bank building, the tallest building in Brooklyn, which was converted into condos costing upwards of three million dollars. Ten days ago, on Saturday the 20th, I was walking down to the Brooklyn Academy of Music when a number of the corrugated metal sheets covering the scaffold blew off. They nearly hit me and a few other pedestrians, and badly damaged several parked cars. 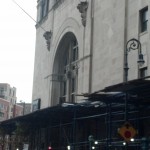 A Brooklyn landmark, surrounded by a Brooklyn embarrassment. 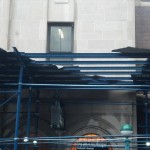 Sheets blew off the scaffolding directly over the subway entrance. 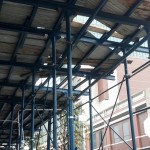 More sheets blown off or in disarray, with the unsecured wooden planks on top that failed to hold them down. 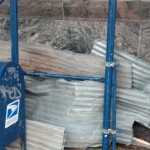 These sheets, stacked against the side of the building, were not there during the week, so they aren’t the ones that blew off ten days ago. 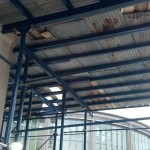 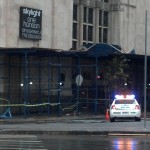 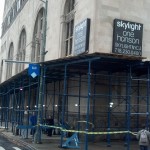 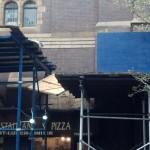 The scaffolding continues to the restaurant next door, with the same quality construction work. 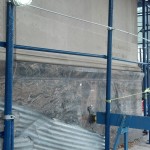 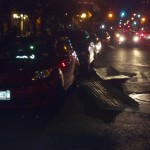 Saturday night, October 20 — metal sheets are blown off One Hanson Place’s sidewalk shed, damaging cars and nearly striking me and several other pedestrians. 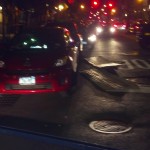 Metal sheets blown off One Hanson Place lie next to the car they damaged.

This morning, I walked around the entire neighborhood, passing many buildings surrounded by construction scaffolding, and only one of those scaffolds had come apart: the one around One Hanson Place. Crumpled pieces of corrugated metal lay stacked against the wall of the building, while a police officer stood guard. On top of the scaffolding, you could see haphazardly scattered wooden planks, more corrugated sheeting in disarray, and boards and other debris scattered on top and underneath.

One of the residents, standing with a cup of takeout coffee chatting with the police officer, shrugged at the sight. “It was pretty windy last night,” he said, with the combination of arrogance and ignorance that characterizes too many of the wealthy transplants to this neighborhood. “You have to expect something like this.”

No, actually, we don’t. Construction scaffolding is supposed to be able to withstand winds, and no other scaffolding in the neighborhood came apart this way. After last week’s near-disaster, I talked to a construction worker putting together scaffolding on a building in Dumbo, and asked them how the corrugated sheets were held down. He pointed to his colleagues lifting long metal beams off a flatbed truck, and explained that those beams are placed on top of the metal sheets and bolted to the scaffolding below. I’m willing to bet that scaffold, a block from the waterfront, is not scattered all over the block this morning.

As far as I could tell from the ground, the metal sheets at One Hanson Place were held down only by long wooden planks placed on top of them. As we saw last weekend, even a moderate wind can lift up a sheet even with those planks on top. The city’s building code has very detailed requirements for the wind loads these sheds are expected to be able to withstand.

It was frightening and surprising when this scaffolding came apart last week. Had I been halfway across the street, instead of standing on the corner, I could very well have been killed. It is at the least disgracefully careless of this building’s management to let it happen again, especially when they had such explicit advance warning of what might happen.

Even though it’s probably unfair, it’s hard not to see this as exemplifying the attitude of luxury real-estate developers towards the neighborhoods and the people they invade with their projects. This area has been assaulted over and over, by Ratner’s hideous malls, by his arena, and by the vast wasteland created by his Atlantic Yards boondoggle. Other developers have destroyed landmarks, defaced neighborhoods with wildly inappropriate projects, and even scrawled a hideous piece of graffiti on Prospect Park’s skyline.