“How the hell can you run a goddamn railroad without swearing? “

I watched two classic 1970s New York City movies this week — Taxi Driver and The Taking Of Pelham One Two Three. And I liked the latter a lot more than the former. 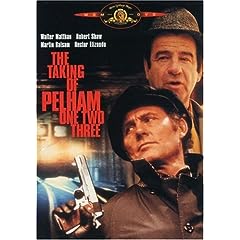 Pelham is by far the best Quentin Tarantino film ever made, and he was 11 years old when it came out. It’s a classic thriller about the hijacking of a subway train — identified by the location and time of its departure in the Bronx — with a stellar cast and fantastic shots of early 1970s New York. Great scenes in Union Square and along Lafayette Street and Fourth Avenue, and a car crash staged next to the cube on Astor Place, when there was a “Gourmet Treats” store where the Starbucks is now.

And of course, a lot of wonderful subway footage from the era when subway signs were not color-coded, and were hand-cranked. And the fare was 35 cents. The best line (of many contenders), from an irascible train dispatcher: “Screw the goddamn passengers! What the hell did they expect for their lousy 35 cents — to live forever?”

And one of the single best endings of any movie, ever. Oh! And a whiny egotistic mayor who is a dead ringer for Ed Koch, years before anyone had ever even heard of him.

Meanwhile, Taxi Driver is a disturbing film that’s not much fun to watch. Aside from the nostalgia shots of the city, the part I enjoyed most was seeing Robert DeNiro and Harvey Keitel and Jodie Foster so young, long before they were superstars. The acting is superb, but they’ve all made much better movies and so has Scorcese. The writing and direction are heavy-handed, and I don’t find the “grit” of 1970s New York all that romantic or interesting. These characters are nowhere near as compelling as Hoffman and Voight in Midnight Cowboy; they have no sweetness or innocence or depth. Overall you just want to take a shower after seeing it.

This entry was posted in Uncategorized and tagged movies, subways. Bookmark the permalink.

4 Responses to “How the hell can you run a goddamn railroad without swearing? “