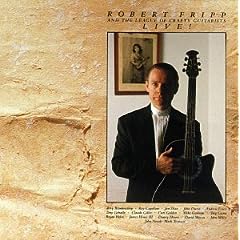 Robert Fripp is one of the very few guitarists who are recognizable almost as soon as they play a note. Most of the others in this category — Jimi Hendrix, Richard Thompson, Muddy Waters, Mark Knopfler — are emotional players who rip loose on their instruments and grab you by the throat. Fripp is exactly the opposite, an intellectual player who seemingly never plays anything he hasn’t thought out in advance, and for whom a raised eyebrow is an outpouring of emotion. Nonetheless he is a compelling and passionate player; it’s that contradiction that draws me to him.

Along with his League Of Crafty Guitarists, he played a formal and precise show tonight at the Ethical Culture Society. Fripp, whose careful interlocking guitar parts were at the center of every incarnation of King Crimson, and whose howling guitar drove songs ranging from Bowie’s “Scary Monsters” to Blondie’s “Fade Away and Radiate,” is in his sixties now, and in some ways white hair suits him better. After his formal bows left, right and center, he kissed his guitar, took a seat on a stool, and began to layer guitar loops one over the other, hardly moving or looking up.

After a few pieces (not songs, surely), he gave a nod offstage, and the ten Crafty Guitarists filed out in a line to their stools, set in a semicircle, with Fripp at one end, and the never-introduced leader* of the group on the other. At another nod from Fripp, the leader played a single note, then moved his guitar and his body towards the woman next to him, who in turn played the next note, and “threw” the piece to the man to her right, and the song began, each guitarist playing a single note in turn, a complex melody created by precise timing enforced by physical motion. Soon all ten were playing interlocking parts in strange time signatures as Fripp sat back, expressionless, listening to ten acoustic guitars build a wall of music, something like a Philip Glass piece, until he shattered it with a close-to-feedback howl from his guitar, the only electric on the stage.

The songs ranged from their own compositions to King Crimson songs (“Vroom”) to the only instrumental the Beatles ever recorded (“Flying” — “Revolution #9” doesn’t count as a song) and a television theme song I couldn’t identify. (I have a very hard time identifying instrumental music; I’ve played fiddle tunes at jams from start to finish, played them well at high speed, and at the end turned to the person next to me and said, “What’s that one called again?”)

The LCG is the performance ensemble of Fripp’s Guitar Craft workshops, which focus on developing “relationships” with the guitar, with music, and with oneself, and which depend on what Fripp calls the “New Standard Tuning,” (CGDAEG). This is about as far from the music I play as it’s possible to get and still be enjoyable, so it was an interesting evening but not one that made me come home and want to play.

I first saw Fripp play more than 20 years ago, back when they had concerts on Pier 84 next to where the Intrepid is nowadays (or will be when it gets out of drydock). It was the summer of 1984 and he was playing with the best incarnation of King Crimson, when the band was himself, Adrian Belew, Tony Levin and Bill Bruford. He sat on one side of the stage, on a stool, surrounded by his samplers and synthesizers, seemingly unmoved and unaffected by the antics of Belew and Levin and Bruford with his 360-degree drumkit. The beauty of that band was the perfect interplay between the studious Fripp and the outrageous Belew, their guitars interlocking and contrasting perfectly. Fripp hasn’t moved from that stool nor changed his black clothing in all the intervening years. His hair is white now, and he wears contacts, and while I missed the contrasts and energies of the King Crimson days, it was a joy to sit and watch him create his sound live, and hear extremely intellectual music that can still reach me emotionally.

*I assumed this was Curt Golden, since he usually leads this group in North America, and the guy looked like Golden’s photo. I’m told by a couple of anonymous posters (one polite, one childishly rude) that it’s not him; this is an unfortunate side-effect of Fripp not uttering a single word during the show (and in fact, any time I’ve seen him play). I’m told this was indeed Hernan Nuñez but the LCG site has no further info. Fripp’s performance philosophy is vastly different from my own; I was disappointed to listen to ten very talented musicians without ever knowing who they were or what else they’d done, but this is in line with Fripp’s overall focus on the music to the exclusion of anything he’d consider extraneous.

7 Responses to Frippery in Manhattan